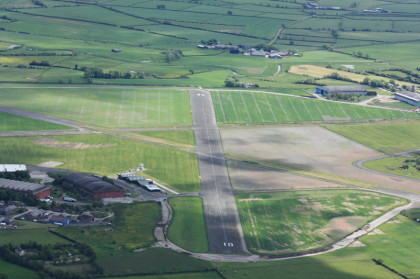 AVGAS and JET A-1 now available

Navigation Aids on aerodrome – None

Fuel – AVGAS 100LL, Jet A1 and MOGAS by arrangement

Kirkbride Airfield was formerly known as RAF Kirkbride and is located 9 miles to the west of Carlisle, Cumbria. Construction of the airfield began in 1937, when the Ministry of Defence began acquiring land for the airfield from the surround area and it opened as No. 12 Maintenance Unit (12MU) in May 1939 with a single grass runway and 15 hangars.

Construction of concrete runways began in January 1940, after the United Kingdom had declared it was at war with Germany. During World War II Kirkbride served as a gateway between aircraft manufacturers and front line units and being out of the reach of most enemy bombers, it had no frontline squadrons on site and was staffed by mostly civilians.The only military units were 12MU and No.16 Ferry Pilots Pool of the Air Transport Auxiliary. During the war 12MU handled just about every aircraft type in the RAF inventory

After the war Kirkbride became a storage site for the many surplus aircraft the RAF had and in 1946 it had about 1200 airframes stored on the airfield, ranging from Auster observation planes to Liberator heavy bombers.

In September 1960 NATO announced it was not interested in retaining the airfield, and in November of the same year an attempt was made to let the United States use it as a missile tracking station.That £12m project was cancelled in March 1963 and in June 1964 the MoD announced that Krikbride was to be sold off for industrial development.

Kirkbride Airfield is currently owned and maintained by Solway Light Aviation Ltd and makes a solid claim to be one of the most picturesque airfields in the UK. I wouldn’t disagree.

Kirkbride Airfield is situated in North West corner of Cumbria, with  the picturesque fells of The Lake District to the East and the Solway heritage coast on the West.

With both grass and Asphalt runways available, a pilot can practice a variety of take off and landing techniques in one visit. You will notice that the site itself is huge, with 14 of the original hangars still present, although they are mainly used for storage at present.

Kirkbride Airfield is indeed set amongst some of the most fantastic scenery that the UK offers and if you are looking for a scenic flight, then arriving into and departing from Kirkbride offer both. Travelling North, you will fly above the peaks of The Lake District and simply marvel in the beauty that Cumbria offers. Having flown into Kirkbride during the winter and summer, both trips presented unparalleled views and are included in the gallery below.

PPR is required at Kirkbride, as the airfield supports many non-aviation activities, particularly driving events, but aircraft are a priority and any events will cease whilst visiting pilots and aircraft are in the circuit. Any such activities will be included in your brief.

Kirkbride is also home to Chris Jones Gyroplanes, who maintains a comprehensive website. Flight training on Gyroplanes keeps Chris busy, which is pleasing and some fantastic aircraft are available to view as you explore the airfield. The website features a brilliant gallery of smiling faces from those learning to fly and enjoying an experience flight. A flying suit and scarf are provided for those on an experience flight and it is something that I plan to do on my next visit.

Just off-site is the White Heather Hotel, which has been connected with the airfield since inception, where No16 Ferry Pilots Pool of the Air Transport Auxiliary set up their base. The White Heather Hotel serves meals on Wednesdays and weekends, however for those wishing to stretch their legs, a slightly longer walk will take you into the village, where the local public house serves meals.

From whichever direction you approach or depart Kirkbride, you will be flying over some of the most picturesque scenery in the UK. If you have the time, make sure you fly over the mountains of The Lake District and enjoy over flying Bassenthwaite Lake, Derwent Water, Thirlmere, Ullswater, Coniston and Windermere. Only 9 miles away is Carlisle Airport, another fantastic airport to visit and also subject to a Get Into Flying Airfield Review.

You should plan to arrive at Kirkbride and join overhead on QFE as advised by Kirkbride Radio. Circuits are always on the south side of the airfield and you must always avoid over flying the noise sensitive village of Kirkbride to the north.

Due to the gyroplane activity, vigilance in the circuit is paramount, although all flying machines integrate seamlessly.

Constant maintenance is ongoing at Kirkbride and as mentioned, the site is huge and therefore the potential for future aviation is immense.

There was a very successful fly-in in May 2016 and more are planned!

Kirkbride is a hidden gem. Warm and friendly, if not a little underused. The Gyroplane school thrives and both of my recent visits rank in my top 5 flying adventures to date.

Plan the flight with Airbox RunwayHD and make the trip, you will not be disappointed.

For videos showing VRP’s, arrivals and departures to and from Kirkbride Airfield, a selection are available on the author’s YouTube channel. 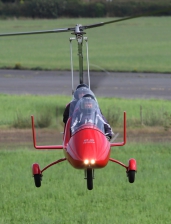 Remember to bring your camera

What should you wear

Best to wear jeans or comfortable trousers and a fleece, walking boots or trainers should keep your feet warm.

On arrival you will be kitted out with a flying suit, neck warmer, gloves and a helmet.